The website in the url below offers some gift options for the upcoming holiday season. These gifts are for the people in your life who are more scientifically-minded—or, at least, who like the idea of stuffed toy replicas of giant microbes—"a million times actual size!"
https://www.giantmicrobes.com/
There are microbes of the "cells and body" (e.g., brain cells, antibodies, and plasma), there is a section on "family health" (e.g., chicken pox, ear wax, and diarrhea), and "wildlife" (e.g., dust mites and "brain eating amoeba"). I think one of the best ranges is the "diseases," which includes a "nasty germs" list (e.g., listeria and Lyme's disease), as well as "exotics" (e.g., anthrax and gangrene), and "plagues" (e.g., cholera and Ebola). According to the "New & Popular" section, one of their best sellers is the kidney stone—here it is, in case you were wondering what it looks like: 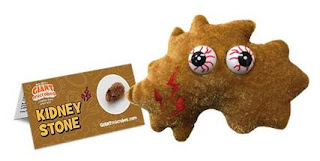 Strategic CSR - End of the world!

The article in the url below paints a dire picture of where we are, environmentally-speaking (just in case you hadn't noticed):
"At the end of 2016, before Puerto Rico's power grid collapsed, wildfires reached the Arctic, and a large swath of North Carolina was submerged under floodwaters, Jonathan Gosling published an academic paper asking what might have seemed like a shrill question: How should we prepare for the consequences of planetary climate catastrophe?"
As recent articles and UN reports attest, since then, things have not gotten any better. I am not sure if we should be comforted (or depressed) to learn that there are academics preparing for the worst:
"Almost two years later, as the U.S. stumbles through a second consecutive season of record hurricanes and fires, more academics are approaching questions once reserved for doomsday cults. Can modern society prepare for a world in which global warming threatens large-scale social, economic, and political upheaval? What are the policy and social implications of rapid, and mostly unpleasant, climate disruption?"
There are two aspects to any response. The first is adaptation – the idea that we will need to adjust our standard of living almost immediately. And, even at the most basic level, this will still constitute substantive change:
"In the language of climate change, 'adaptation' refers to ways to blunt the immediate effects of extreme weather, such as building seawalls, conserving drinking water, updating building codes, and helping more people get disaster insurance. The costs are enormous: The U.S. government is considering a 5-mile, $20 billion seawall to protect New York City against storm surges, while Louisiana wants to spend $50 billion to save parts of its shoreline from sinking. Poorer countries could require $500 billion a year to adapt, according to the United Nations."
But, the most pessimistic academics are thinking of the concept of adaptation in more radical terms – a "deep adaptation agenda":
"… that means not only rapid decarbonization and storm-resistant infrastructure, but also building water and communications systems that won't fail if the power grid collapses and searching for ways to safeguard the food supply by protecting pollinating insects."
What the article does not discuss, however, is the second aspect of any response to climate change, innovation – the idea that we will need to develop new technologies to stop things from getting any worse and, in terms of the most ideal outcome, start reversing the worst of the damage that has already been done. The danger, in terms of a worst case scenario, is that we will cross a tipping point that means the process becomes non-reversible:
"Propelling the movement are signs that the problem is worsening at an accelerating rate. In an article this summer in the Proceedings of the National Academy of Sciences, 16 climate scientists from around the world argued that the planet may be much closer than previously realized to locking in what they call a 'hothouse' trajectory—warming of 4C or 5C (7F or 9F), 'with serious challenges for the viability of human societies.'"
Either way, the outlook is pretty bleak:
"Jem Bendell, a professor at the University of Cumbria who popularized the term deep adaptation, calls it a mix of physical changes—pulling back from the coast, closing climate-exposed industrial facilities, planning for food rationing, letting landscapes return to their natural state—with cultural shifts, including 'giving up expectations for certain types of consumption' and learning to rely more on the people around us. 'The evidence before us suggests that we are set for disruptive and uncontrollable levels of climate change, bringing starvation, destruction, migration, disease and war. … 'We need to appreciate what kind of adaptation is possible.'"
While this might be a worst case scenario and, to be sure, there is significant disagreement about the extent of the impact of a changing climate, it seems worth at least having a discussion about what the worst scenario might look like. Better to be prepared and then have to do less, than thinking we will somehow muddle through and, instead, be caught by surprise.
Take care
David
David Chandler
Strategic Corporate Social Responsibility: Sustainable Value Creation (4e)
© Sage Publications, 2017
Instructor Teaching and Student Study Site: https://study.sagepub.com/chandler4e
Strategic CSR Simulation: http://www.strategiccsrsim.com/
The library of CSR Newsletters are archived at: https://strategiccsr-sage.blogspot.com/

New Climate Debate: How to Adapt to the End of the World

Leave it to Patagonia to fight the good fight. I love the fact that this firm is run more like a social activist organization than a for-profit corporation:
"Outdoor clothing company Patagonia Inc. has committed the $10 million it saved from federal tax cuts championed by President Donald Trump to nonprofit groups who work on conservation and climate issues."
And the justification demonstrates the firm's commitment to the greater good. According to the firm's CEO, Rose Marcario:
"'Taxes protect the most vulnerable in our society, our public lands and other life-giving resources,' she wrote. 'In spite of this, the Trump administration initiated a corporate tax cut, threatening these services at the expense of our planet.'"
Patagonia is the ultimate anti-profit firm that seems to make money in spite of itself:
"Patagonia has linked its brand with conservation, such as its 2011 Black Friday advertisement telling consumers not to engage in empty consumption by purchasing its jackets. In 2017, it launched a program called 'Worn Wear,' which allows customers to pay for repairs to old items or trade them in for store credit."
Now, if we could just get more customers to invest in the Patagonia business model by shopping there, we might be working towards a more sustainable economy.
Take care
David
David Chandler
Strategic Corporate Social Responsibility: Sustainable Value Creation (4e)
© Sage Publications, 2017
Instructor Teaching and Student Study Site: https://study.sagepub.com/chandler4e
Strategic CSR Simulation: http://www.strategiccsrsim.com/
The library of CSR Newsletters are archived at: https://strategiccsr-sage.blogspot.com/
Patagonia Donates $10 Million Trump Tax Savings to Green Groups
By Eric Roston
November 29, 2018
Bloomberg Businessweek
https://www.bloomberg.com/news/articles/2018-11-28/patagonia-donates-10-million-trump-tax-savings-to-green-groups
Posted by David Chandler at 6:20 PM